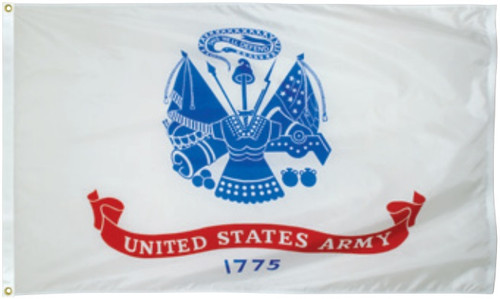 Our 12" x 18" United States Army Flag is made to official military design specifications and of course is Made in the USA.

The Flag of the United States Army displays a blue replica of the official seal of the Department of the Army set on a white field. Beneath the seal is a broad scarlet scroll bearing the inscription in white letters, United States Army. Beneath the scroll, in blue Arabic numerals, is 1775 the year in which the Army was created with the appointment of General George Washington asCommander-in-Chief. All of this in on a white background.

The flag was officially adopted by President Dwight D. Eisenhower, on June 12, 1956, with Executive Order 10670.