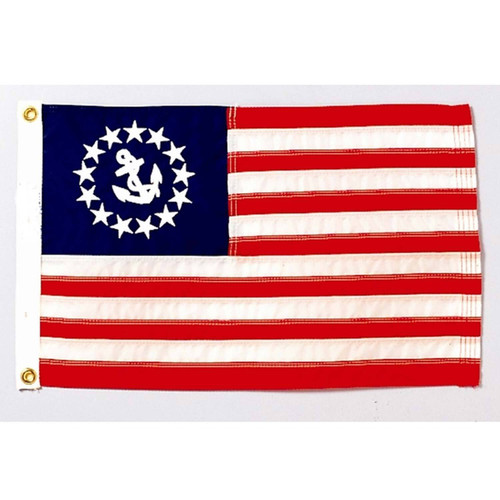 Availability:
16x24", 20x30" are IN STOCK and ship nex__t business day. Others are made to order and ship in four to six weeks.

This U.S. Yacht Ensign Flag is made with 200 denier nylon and embroidered stars and sewn strips on the smaller sizes up to the 30" x 46" where there are sewn applique stars and sewn stripes.  All ensigns have a strong header and brass grommets.   We offer several sizes

The US Yacht Ensign is a special flag, looking like the national flag and ensign but with a fouled anchor in a circle of stars in the canton, was created by Act of Congress in August, 1848 as a flag to be used by licensed U.S. yachts. This was apparently not intended to be an ensign, but rather was intended to be used as a signal flag by a licensed yacht to declare herself exempt from customs duties, and its usage was required by licensed yachts. Due to its similarity to the national ensign, however, both licensed and unlicensed yachts started using this as the ensign, and eventually the US government confirmed that it would accept this practice for yachts in United States waters, but the national flag is the only ensign allowable in international or foreign waters.