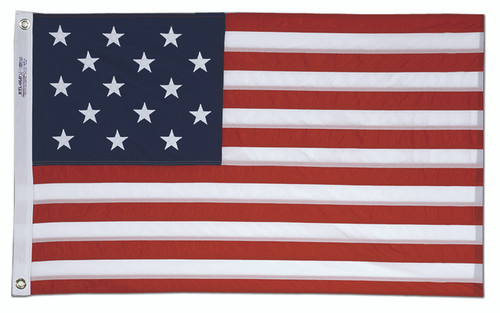 Availability:
3x5' is IN STOCK and ships next business day. Others are Made to Order and ship in 2-3 days.

The Star Spangle Banner Flag is made of Nylon offering the optimum combination of quality craftsmanship and value...and of course....Made in the USA!

The Star Spangled Banner has only 15 Stars and 15 Stripes and was created when Vermont and Kentucky were admitted to the Union.  This flag waved over Fort McHenry in the Baltimore Harbor during the British attack on September 13, 1814.   As Francis Scott Key watched the defense of Fort McHenry as a hostage on the British Frigate "Surprise",  he was inspired by the flag that was waving in the early morning and he wrote the poem "Defense of Fort McHenry" which later became our National Anthem, "The Star Spangle Banner".