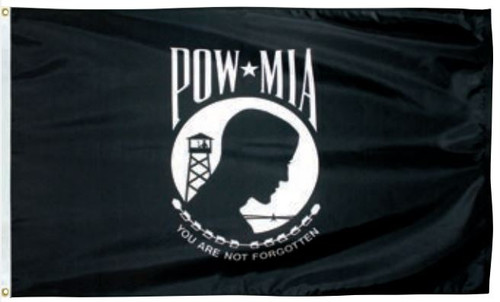 Availability:
12" x 18" and DOUBLE SIDED 2' x 3' are IN STOCK and ship next business day and others are Made to Order Usually ships in 5-7 Business Days

United States Military POW/MIA flag is an American flag designed as a symbol of citizen's concern about United States military personnel taken as prisoners of war (POWs) or listed as missing in action (MIA).

The POW/MIA flag was created by the National League of Families and officially recognized by the Congress in conjunction with the Vietnam War POW/MIA issue, "as the symbol of our Nation's concern and commitment to resolving as fully as possible the fates of Americans still prisoner, missing and unaccounted for in Southeast Asia, thus ending the uncertainty for their families and the Nation."

The original design for the flag was created by William Graham Wilkin III. The National League of Families then-national coordinator, POW wife Evelyn Grubb, oversaw its development and also campaigned to gain its widespread acceptance and use by the United States government and also local governments and civilian organizations across the United States.