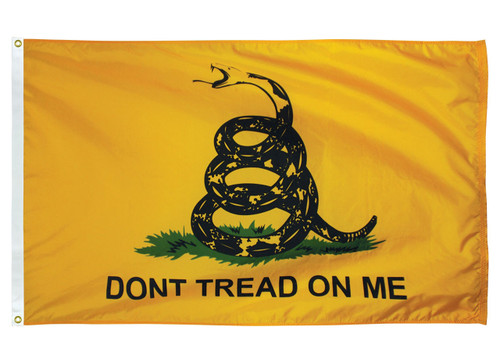 Availability:
Made to Order Usually ships in 5-7 Business Days

The Gadsden Historic American Flag is made of 200 Denier nylon with a strong header and brass grommets.  The Gadsden flag has a yellow field depicting a rattlesnake coiled and ready to strike. Positioned below the snake is the legend "DONT TREAD ON ME."

The flag was designed by and is named after American general and statesman Christopher Gadsden. It was also used by the Continental Marines as an early motto flag. It was the first flag ever carried into battle by the Continental Marine Corps, during the American Revolution.  Beginning in 2009, the Gadsden Flag has become an adopted symbol of the American Tea Party movement. It was also seen being displayed by members of Congress at Tea Party rallies. Some lawmakers have dubbed it a political symbol because of the Tea Party connection, and the political nature of Tea Party supporters.